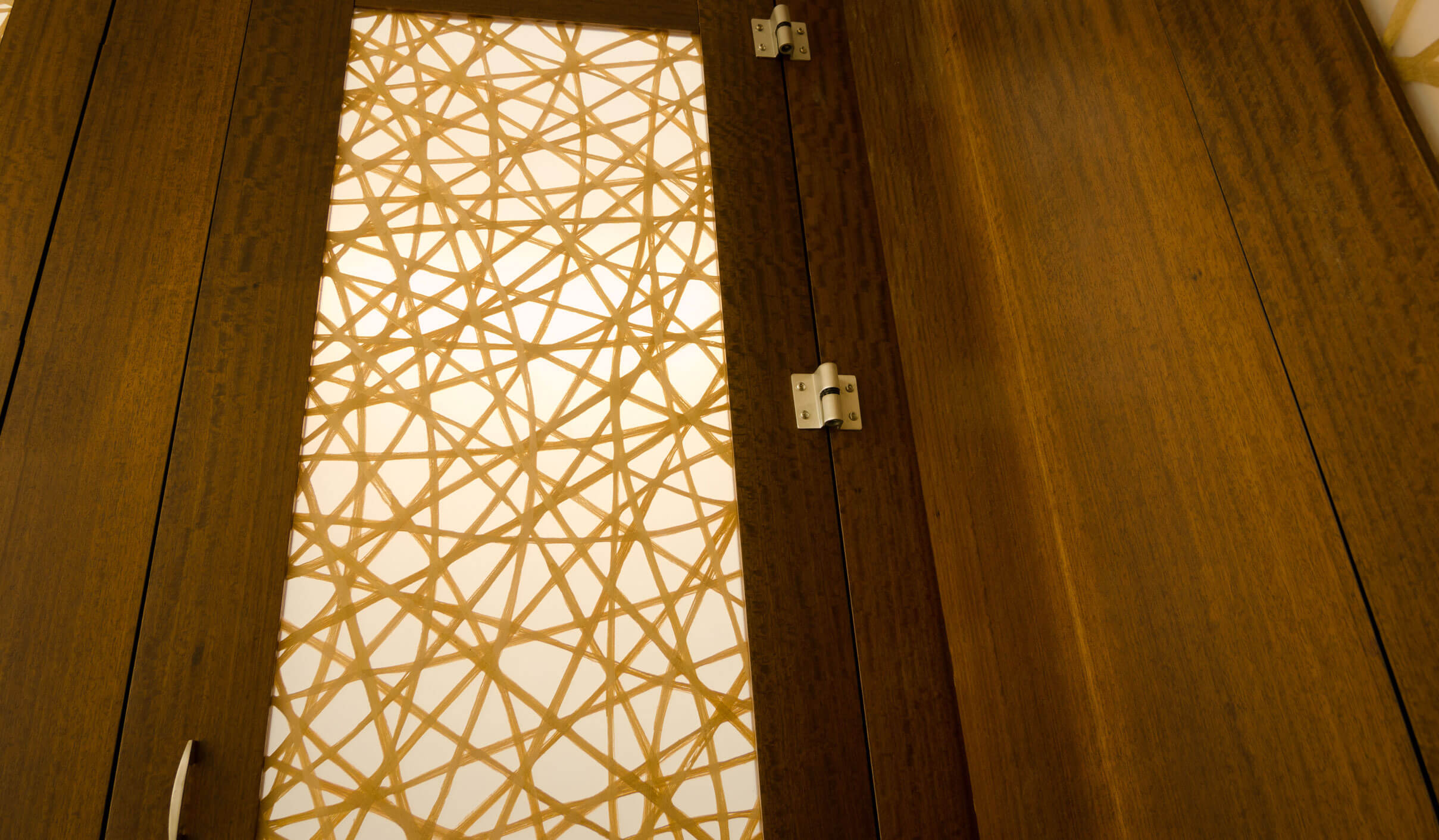 Eager to Make a Good Impression
Even though we’ve been in the business for more than 40 years, we've found there's always something new to learn, especially when it comes to high-end doors. Years ago, we had a contract in Summerlin which was Ironwood’s largest single-dollar job to date, and we were eager, to say the least, to make a great impression. No expense was spared. The customer wanted a nine-foot door with no mid-rail and an acrylic door lite insert. The designer wanted the partition finishes to match the customer’s corporate jet. Hand-woven silk from Tibet was encapsulated between acrylic sheets for the door lite insert and a specific tree from North Africa was flown to Spain to be fumed, giving it the desired “smokey brown” color, before being turned into veneer in Indiana.

The Search for Just-Right Materials
Early in the process, we experimented with using particle board core, , which was flat but did not allow for strong joining. Then, we experimented with solid alder and discovered its shortcomings, included twisting, as the lumber continued to dry once parts were made. At this time, Ironwood was using Sitka spruce, which had a very long, fine, and straight grain. This quality made it a stable, light weight, affordable, and available material — in other words, a good fit because many previous jobs were built successfully utilizing it.

We had not yet, however, ever made a nine-foot door with these specs. We thought, “what could go wrong?” The answer, unfortunately, was many, many things. In the end, approximately half of the doors held tolerance, while the rest did not. This “warp” was visible when the doors were in the rest position and had a pilaster (without warping) as a reference comparison. We flew out to the site twice to identify the issue and attempt to field repair. We rebuilt the doors twice at our own cost and ultimately contracted a mill worker in Las Vegas to produce new doors for the project.

Identifying Our Mistakes:
Once the project was completed, we were able to step back, objectively look at what happened, and learn from the experience. As Henry Ford said, “The only real mistake is the one from which we learn nothing.”

Lessons for the Future

The cost to make our customer happy was massive — equal to the third-largest job we had ever built. The biggest lesson learned was education is expensive. It is a pay-now or pay-later scenario where education costs are either upfront or after the mistake has been made. Ironwood wants to continue to be an expert in toilet partitions. To achieve this, we are committed to investing in education as well as accepting on-the-job lessons as part of our learning. As such, we are committed to investing in as many lessons up front as possible. Another lesson learned was that our commitment to our customers extends beyond our own comfort level. This is and will be our first priority. We would not, nor will not, leave a customer alone with a problem of our making.