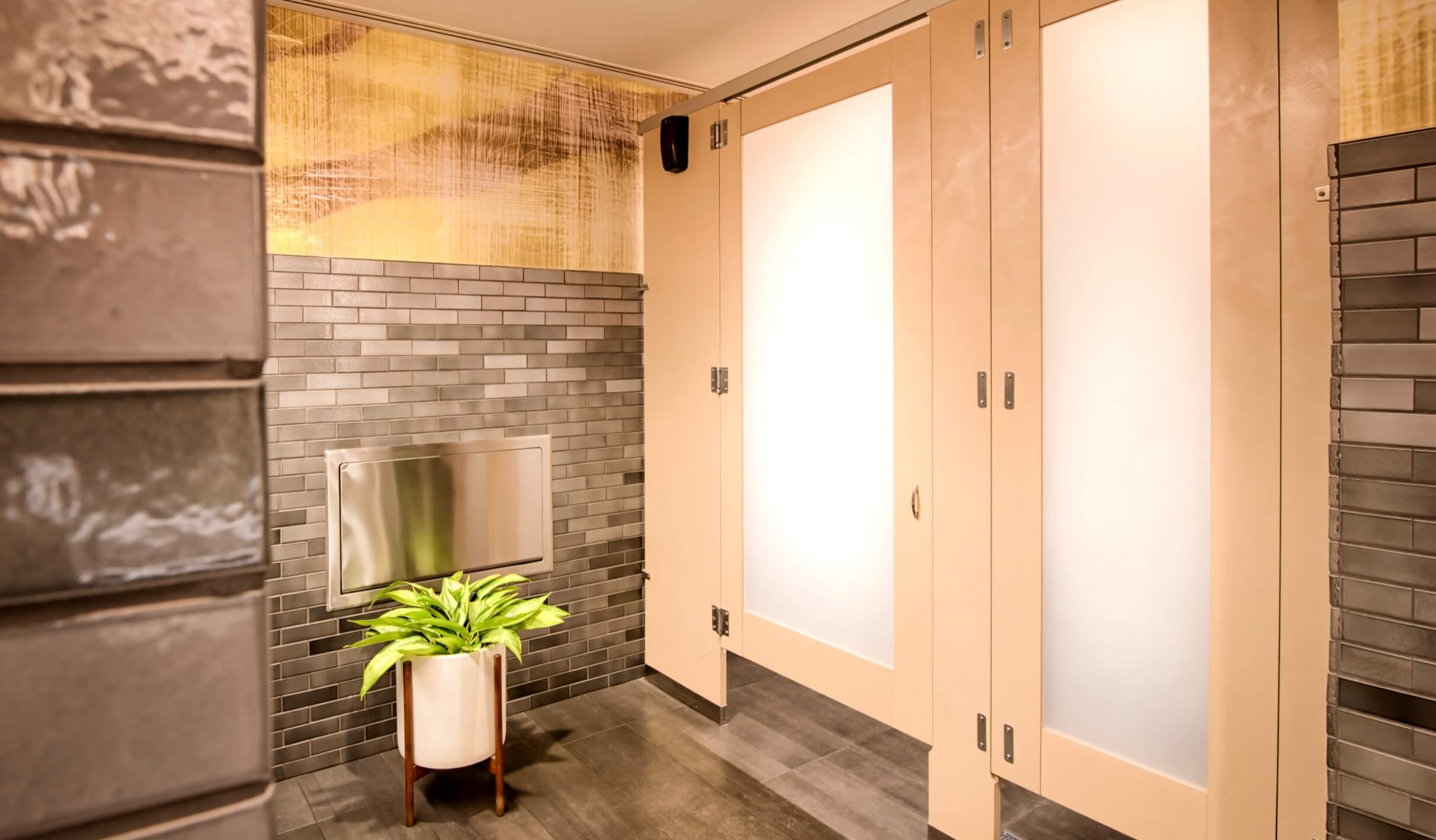 Some Perplexing Things About Alcoves

And advice for their consideration

The first two layout options are the most common in the industry because of their practicality. The latter two are less used, although the alcove style has increased in popularity over the past 20 years. There are good reasons to specify an alcove layout. The most popular is the influence of ADA accessibility considerations since the law’s passage. An alcove can also fill space in a bathroom that might otherwise go unused. Finally, alcove partitions give wheelchair-bound customers a better experience.

For all of their benefits, alcove partitions present some structural challenges that need to be considered.

Structural Challenges
There is no inherent lateral support for the run of panel, pilaster, door, and wall pilaster (see Figure 1). This arrangement lacks stability, and the wider the room, the less stable the configuration. Connecting the panels and pilasters to each other with hardware does not solve the problem. Instead, these connections effectively act as a series of hinges that are ultimately unstable.

No Simple Solutions
All of the traditional mounting methods — floor-to-ceiling, headrail-braced, ceiling-hung, and floor-mount — need varying degrees of support to stabilize alcove partitions. The core issue is the need for lateral support, without which the partitions will inevitably rock.

Headrail-braced alcove partitions can be stabilized with a “return headrail” running from the partitions’ panels to the back wall, as shown below (see Figure 2). This return headrail can be very effective, but the look is often undesirable.

Floor-to-ceiling alcove partitions can often work without any additional components. However, if the ceiling is very high (over nine feet), the pilaster may flex, which can lead to rattling doors. This can be stabilized by attaching a return headrail to the middle pilaster. But, again, the look may be undesirable.

Pedestals can be added to ceiling-hung partitions to greatly improve stability. This approach, however, sacrifices the benefits of using the ceiling-hung method in the first place.

Floor-mount alcove partitions require lateral support but cannot utilize a return headrail or pedestal solutions explored above. The only effective option for this mounting method is another pilaster attached perpendicular to the middle pilaster. Unfortunately, if such a pilaster is mounted inside the stall, it encroaches in the ADA-required clear space. If a perpendicular pilaster is mounted on the outside, it almost always looks bad. (See Figure 3)

The perpendicular pilaster support can be applied to any of the mounting options discussed above with the same negative consequences.

Conclusion
When designing alcove restroom partitions, consider the inherent lack of lateral support and take preventative action. This may include adding elements that sometimes interfere with design intent. The news is that every room is unique, and customized options are always possible. We’d be happy to brainstorm with you about the possibilities. Contact us!